Now it’s time for us to break down Hello Serverless from a serverless monolith into separate functions. In this architecture, each CRUD operation will be a separate Lambda function. Our application will no longer consist of API Gateway proxying all requests to a single Lambda function that executes the appropriate code based on its route configuration. Instead, when a REST endpoint defined by API Gateway receives a request, a specific Lambda function will execute.

This is what the new serverless functions design will look like, and the code for the application can be found here on GitHub. 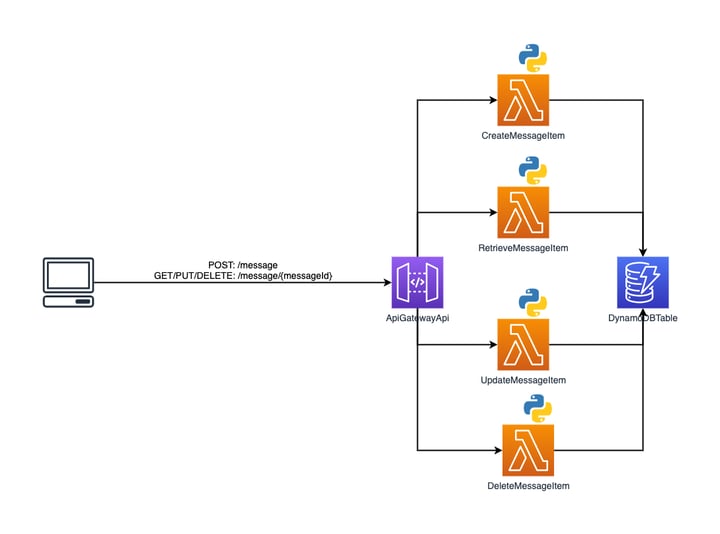 What Do We Mean By Serverless Functions?

There are, of course, drawbacks to adopting multiple serverless functions. The primary drawback is a lack of familiarity with the design. The patterns for building non-serverless web services are largely understood, which is why this series started with a Python Flask application. We separated routes, models, and shared code as someone building a backend web API might routinely do. The structure of our application in this post will be different. We are actually going to combine route and model logic into the application’s serverless functions. Plus, we’re going to have to share code between serverless functions differently. This results in a learning curve. It’s not insurmountable, but people are going to stumble. There are decisions in this version of the application that are the result of my own trial, error, and learning. I settled on how I structure a multi-function serverless application over years of experience.

Neither a serverless monolith nor serverless functions is right or wrong. Which approach to use will be dependent on what you are building and who will be building it. My own preference is for the serverless functions approach about to be described. I think the approach allows for greater flexibility in choosing the best event source for each application operation. It also lets you remove application code and replace it with other managed services from a cloud provider. Application code should be seen as a liability. Code needs to be maintained and it’s a source of potential errors. The less doee there is, the less code to make a mistake in and adversely impact the application. Plus functionality that’s been moved to managed service configuration is arguably easier to audit than application code and some cloud service providers provide tools for auditing service configuration.

However, the recent reexamination of microservices versus monoliths in the container world also applies to the functions versus monolith discussion in the serverless world. Microservices create increased architecture complexity compared to monoliths. The same applies when adopting a serverless functions approach over a serverless monolith, you have to be aware of the complexity and ready to manage it. If you cannot manage your existing containerized microservices architecture properly, a functions approach is going to introduce even more complexity than you are already unable to manage.

Here is how the application has been restructured to break it down into separate functions.

Each of these Lambda function directories has a function.py file that contains all of the function’s code. To put that in perspective, think of how code was broken down previously for, say, the create operation. The route definition and request logic were in app/routes/message.py and the business logic to create a message item in DynamoDB was in app/models/message.py. Instead of spreading that logic across multiple files, it is now all contained in function.py, which we’ll dive into shortly. Finally, each function has its own requirements.txt file because each Lambda function is packaged separately and therefore needs to specify its own code dependencies.

The CodeUri property has been updated to reflect the function’s location. Next, the Handler property is the same but has changed behind the scenes. In the function.py file, handler is not the name of the variable that represents the application instance but is a Python function instead. We’ll look at the handler function in more depth shortly.

Next, we move onto the Policies property where the number of DynamoDB actions the function can perform has been reduced to the only action RetrieveMessageItem needs, dynamodb:GetItem. By splitting our code into separate functions, we can practice a policy of least privileged access, and we can better understand the bounds of what the code does and ask appropriate questions when IAM policy statements do not match expectations. If the RetrieveMessageItem created or altered data, we would have reasonable questions as to why.

Now come down to the Events property where we build off of a change introduced with the serverless monolith. The serverless monolith was triggered by API Gateway and it proxied all paths for any HTTP method, and our application’s code had Python decorators that defined the application’s REST endpoints. With our functions approach, we specify that an HTTP GET request to /message/{message_id}, where message_id is a path parameter variable, will trigger this Lambda function.

What we have done by turning our application into multiple AWS Lambda functions is removed our application’s initialization and route definition code and replaced it with simple configuration declared in our SAM template. This is only the tip of the iceberg, too. As you get deeper into API Gateway, you will find more application code you can remove and even potentially entire Lambda functions you can do away with.

Previously, we separated request logic and business logic between app/routes/message.py and app/models/message.py. The first file had functions that handled a request by extracting any relevant information from the request and passing it to the appropriate function in the second file. We divided our application’s code based on its role in the codebase. In breaking this application up into multiple Lambda functions, we’re breaking down the code instead based on application functionality. That means we’re going to combine, for example, the code for handling a create request with the code for creating an item in DynamoDB in the function.py file for the CreateMessageItem Lambda function (though we will keep some separation between the two). Here’s the code for CreateMessageItem.

The handler() Python function performs the same role as the request logic in the previous applications. For CreateMessageItem it retrieves the request body from the event passed from API Gateway to the function. That data is passed to the _create_item() Python function, which is the business logic that does the work of creating the item in DynamoDB. You don’t have to, but I like to keep the split between request and business logic even in Lambda functions. I do this not just because it makes it easier for me to distinguish between the two but, more importantly, it makes it easier to change or even add new event handlers as the requirements of the application evolve. In the next blog post we’ll change the event source for some of the serverless functions which will require us to refactor the handler() code.

As we break down the monolith’s code into functions, we’re left with some leftover code, specifically the code that lets us properly serialize a DynamoDB item into JSON. To handle that, a Python package exists in src/common/ where common code can be placed.

Evolving our application to a serverless architecture doesn’t stop here. Everything we’ve done so far has been to handle synchronous requests. But it’s possible not all the application’s operations need to be done synchronously. In the next blog post, we’ll evolve this application into an event-driven application that can handle events asynchronously.

Continue on to Part 5 of the series, Asynchronous Event-Driven Functions. There we'll evolve this application to its final form..